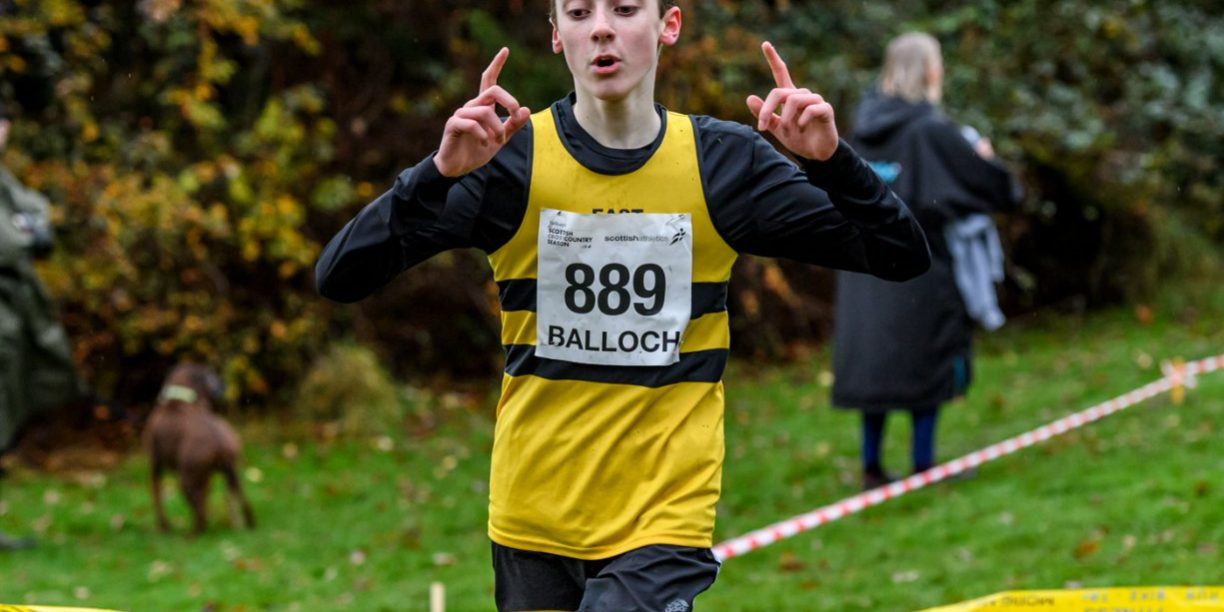 3 individual champions. An individual silver medallist. 3 team medals. And competitive from Under 13 to Masters categories. Not bad!

Matilda Frew got the club off to a flyer with a superb silver in the U13 Girls race, the joint second best performance in the club’s history. An amazing finish saw her charge from 8th to 2nd on the steep uphill stretch to the finish.

Matilda was followed home by Kara Lindsay in 25th, Carrie Charters in 37th and Olivia Baxter in 48th. The U13 Girls team finished 4th – the best finish since 2006.

U13 Boys were next up and it seemed that Angus Wilkinson had been taking note of Matilda Frew’s run. On the final hill, Angus clinched a brilliant individual gold by surging past the Giffnock athlete he had been shadowing throughout the race.

EKAC did a great job of packing the field behind Angus, with Ben Baillie 14th, Euan Thorpe 15th, Rory Charters 20th and Arran Rosling 32nd. That resulted in an outstanding team silver – the first time the club has won an U13 Boys team medal at the Championships!

It didn’t stop there. The U15 Girls continued their team-medal-winning ways (after taking silver at the Short Course XC Championships in October) with a great 3rd, producing the best result for the club since 2005. Rhianna Docherty led the team home in 7th, followed by Aimee Anderson in 13th and Amy Andrew in 17th.

Not to be outdone, the Under 15 Boys also took home an amazing 3rd place in the team race, producing the best result since 1992! Jamie Connor led the team home in 11th with a fine run, followed by Aaron Thomson 17th and Jonathan Hunter 23rd, with Dylan Edwards 33rd, Matthew McQuaid 40th and Kieran Budd 51st.

While Calum Charters was coming a fine 25th in a high-standard U17 Men’s race in the West, over at the East District XC Championships, EKAC member Hannah Anderson (centre) was winning 2 golds in her university vest, taking an excellent victory in the U20 Women’s race by roughly 30 seconds and, in the process, leading her team to 1st. Hannah may be the only EKAC member to have won both an East and West District championship.

The Senior Men team came home a great 5th, making it 3 top 5 finishes in a row. The Masters Men went one better with a brilliant 4th.

Club President Gordon Colvin commented, ‘These fantastic results showcase not only outstanding individual and team performances, but also our strength across all age groups. That’s testament to the hard work put in by athletes, coaches and parents, and by those behind the scenes who look after athletes’ welfare or contribute via the Committee. It’s a proud moment for all connected with the club.

‘We have a strong reputation with the schools in the area, and I know the likes of Duncanrig Secondary, Strathaven Academy and St Andrew’s & St Bride’s High will be thrilled to see their pupils performing at such a high level. Many of our athletes have come to us because a teacher has spotted potential and asked a parent, “Have you thought about taking them to an athletics club?” Those few simple words can lead to a lifetime’s enjoyment of athletics and the friendships that come with it.’