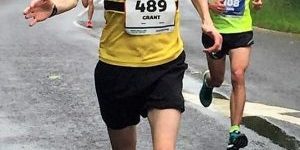 Sunday 26 May saw gutsy Edinburgh Marathon performances by our athletes. With rain early on, puddles aplenty and an increasingly-brutal headwind after the turn, the conditions were those of a summer’s day in East Kilbride!

It’s a mark of the high standards Grant sets himself that he wasn’t entirely happy with his time of 2:46:26. Most mere mortals would jump at it.

Both runs were family affairs for Vivien. She finished the Highland Fling within 1 second of her brother-in-law; in Edinburgh her 2 sisters and dad also completed the course.

It was a great performance given that exams impacted his training.

Keith Charters was also running his first marathon. Having been not far behind Vivien for first half, a major IT-band issue at 30km put paid to a meaningful time.

A Jelly-Baby-assisted painful 12km hobble followed, but he eventually made the finish.

The good thing about a first attempt is it always brings a PB if you reach the line.